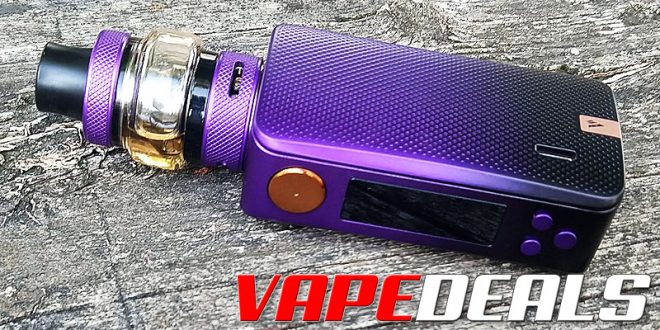 The Vaporesso GEN Nano Starter Kit in this review was provided by our friends over at Vaporesso (thank you!). Feel free to refer to their site if you would like additional info on this device or any of their other products.

After writing over 8,000 posts for VAPE.DEALS, it’s not uncommon for me to hit a wall.  It’s a dreary spell that enchants me on a monthly basis.  After all, I’m required to write about almost every product that hits the mass market…even if it doesn’t appeal to me (and a lot of them don’t!).  So, how do I snap out of it?  I imagine it’s the same way a lot of you do: a company releases an item that just happens to tick all the right boxes.  Suddenly, I’m alive again!  That’s exactly what happened when I first saw the Vaporesso GEN Nano.  The original GEN 220W is one of my favorite devices.  To me, it’s almost perfect…but it’s not exactly portable.  When I found out they were creating a mini version with an internal battery, I was sold.

And then a GEN Nano fell into my lap…

Shane (our hardware reviewer) had several products to review within a short amount of time, so I offered to take this one off his plate.  It seemed like a win-win scenario: I got to review something that was already on my wish list, and his girlfriend didn’t dump him for spending all of his free time evaluating Vaporesso products.

Bear with me, I’m a bit rusty when it comes to writing reviews (it’s been almost 4 years!).  But, if you can make it to the end, perhaps all my rambling will weave together and leave you with an accurate impression of this kit.

Let’s start with the basic stuff.  What is vaping?  Vaping is the practice of inhaling and exhaling vapor, which is produced by heating vegetable glycerin, propylene glycol, nicotine, and flavorings by means of…

I’m kidding.  By basic stuff, I was referring to the specs 😉

If you’re like me, you’ll probably just skip over this section…which means I can pretty much say whatever I want here without any consequences.  The options are limitless!  But, despite the fact that my mind is swirling with all my favorite mom jokes right now, I’ll try to remain somewhat professional. 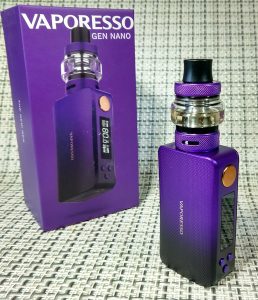 My opinion of the Packaging and Presentation section of reviews has always been the following: unless it’s really bad or really good, it’s not worth dwelling on.  While there may not be anything particularly exciting here, I do feel there’s something important to note.  Vaporesso is one of the few companies that always manages to get this aspect of manufacturing right (Innokin deserves some praise here too).  Their packaging/presentation is clearly designed to appeal to the adult market.  It’s smart, clean, and professional, reminiscent of most high-quality electronic items.  That’s certainly something we should all applaud.

Let’s start with the tank and save the mod for the main event.  I’m sure the majority of readers only have one question in this regard: Is the tank worth the extra $15 investment for the starter kit?  My response: Maybe.  Admittedly, I’m not a big sub-ohm tank user.  When I buy a starter kit, the tank usually stays in the box, doomed to a lonely existence with only a USB cable and user manual to keep it company.  I know there are plenty of others who do the same.  That said, I do think the GTX22 deserves its share of the spotlight.  Here’s why: 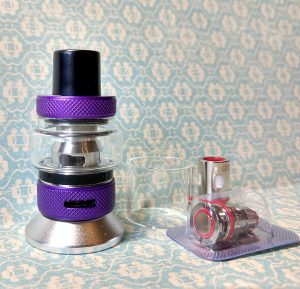 Call me shallow, but the color and style are the things that initially grabbed my attention.  I received a purple Vaporesso GEN Nano, not an easy color to match.  Thankfully, the GTX22 compliments the mod beautifully, which is the same with all the other colorways.  I also appreciate the matte paint finish, as opposed to the glossy look that has been popular over the past few years.  Lastly, the knurled top and bottom match up incredibly well with the signature textured finish of the GEN.  In short, they make a slick little combo. 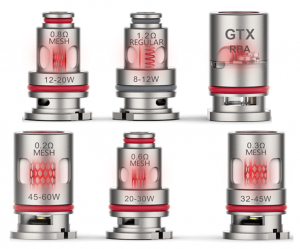 As of now, Vaporesso has 6 different GTX Coils available, which is already enough to inspire optimism for this tank.  It’s also nice to see that most of these coils have a higher resistance (excluding the 0.2Ω and 0.3Ω), making them more suitable for a mod with a 2000mAh battery.  As far as the ones that came with the kit, they both performed quite well.  I’d gladly bestow them my Vanilla Ice Cream Award, that is, a product that is unquestionably good, but still leaves something to be desired.  It looks like some of the other coils (like the 1.2Ω) were specifically designed for MTL.  While I think that’s a fantastic idea, the airflow on the GTX22 wasn’t designed to accommodate an MTL draw.  A hybrid airflow system (like that of the Hellvape Hellbeast) would have been ideal for this tank.

Along with all the other coil options, Vaporesso also has a GTX RBA Coil available (sold separately).  This is a HUGE pro in my book because it means the tank will never become obsolete.  Even if they stop making GTX coils, you’ll always be able to use the tank.  And, obviously, you’ll save a ton of money by wrapping your own coils.

It’s awesome.  Buy it.  Thanks for reading!

Sorry, I just assumed you’d be tired of my rambling by now.  Ok then, buckle in and prepare for a gush fest…because I absolutely adore this thing! Sometimes, when companies create a smaller or larger-sized version of a mod, they’ll go back to the drawing board and make some dramatic design changes.  The Wismec Reuleaux RX75 and Vandy Vape Pulse Duo immediately come to mind.  Not the case here.  The Vaporesso GEN Nano is literally a miniature version of the beloved original.  It’s as if they put it in a machine, pressed a few numbers, and DING!…out pops an adolescent GEN (amidst a small cloud of vapor, for dramatic effect).  His parents should be so proud!  The little guy is already doing Pulse and Eco mode like his Daddy!

Not everything is the same though.  For this review, I’m going to mainly focus on the differences, since most of you are probably familiar with full-sized GEN already.

Regardless of how many pictures you’ve seen, the Vaporesso GEN Nano is probably smaller than you think.  Here’s a fun comparison: the dimensions are comparable to the battery compartments of most dual-18650 box mods!  But, unlike a lot of mini-mods, it’s not remotely awkward to hold.  It fits perfectly in the hand.  The only downside here is the smaller 510 platform—anything over 23.5mm will overhang (it’s barely noticeable with 24mm attys).  I can’t knock it for that though, as I prefer to use smaller atomizers on devices like this.

The GEN Nano has a non-replaceable 2000mAh battery.  Some may consider that a con since a lot of internal battery devices have around 2500mAh capacity.  But, when you take the size of the mod into account, it’s actually a pro.  I’m amazed that they managed to squeeze such a substantial battery in there (it looks more like a 1200 – 1500mAh device).  If you’re using an MTL tank between 12 – 20W, 2000mAh can easily last you all day.  As far as charging goes, it took 88 minutes to go from 10% to 100%, which isn’t bad at all. 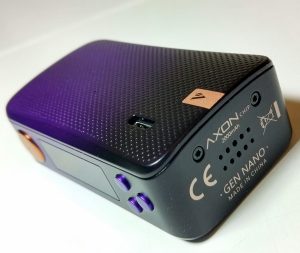 While we’re on the subject, I realize a lot of vapers avoid devices with internal batteries.  I understand the debate—when the battery reaches the end of its life, it takes the mod to the grave with it.  My experiences over the years have changed my opinion on the matter.  Out of the dozens of internal battery devices I’ve owned, only ONCE has the mod outlasted the battery.  More often than not, something in the mod fails first (like the chipset).  But if the internal battery is a deal-breaker, just go for the Vaporesso Swag II instead (single 18650).  I love that device just as much as the GEN Nano.

They made some nice little updates to the AXON Chipset with the GEN Nano.  One of them is the Recommended Wattage Range, which can be found on the bottom right of the display.  I might have rolled my eyes when I first noticed this, assuming it was totally unnecessary.  My opinion changed a few days later when I popped in a new coil.  I was trying to find the sweet spot and couldn’t recall the recommended wattage (which is ONLY visible when you remove the coil).  Then I looked at the screen.  It said: [BEST] 45 – 60W.  Thanks, little guy!  It’s a surprisingly handy feature, especially if you’re using the GTX coils.

I know I’m not the only one who gets annoyed with 0.1W increments (this was one of my cons with the original GEN).  Even as an avid MTL user, I would never be able to distinguish between a 14W and 14.1W output.  Why is this still a thing??  Thankfully, the Vaporesso GEN Nano adjusts in 0.5W increments.  Perfect!  Apparently, they were listening to some of the user feedback. 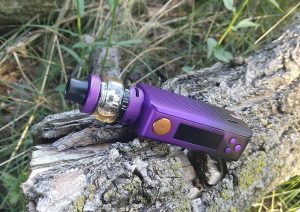 I’ll be honest, this was a difficult product to review.  Why?  Because I was desperately trying to find a few legitimate cons just so I wouldn’t come across as a Vaporesso fanboy.  In that, I failed.  The fact of the matter is that I had incredibly high expectations for this device…and it lived up to every one of them.  Scratch that: I do wish they had ditched the copper button, upgraded to a USB Type-C port, and included a true MTL tank with this kit.  Those complaints are purely subjective though.

If you liked the original GEN and don’t mind vaping under 50W (anything else will deplete the battery too fast), and/or if you regularly use 22mm – 23mm single-coil tanks, then you won’t be disappointed with the Vaporesso GEN Nano.  It is everything it claims to be, and that’s a rarity in the vaping industry.  It does not, however, claim to be the best mini mod on the market…which is unfortunate, because I think it is.  But what do I know?  I’m just a Vaporesso fanboy, after all.