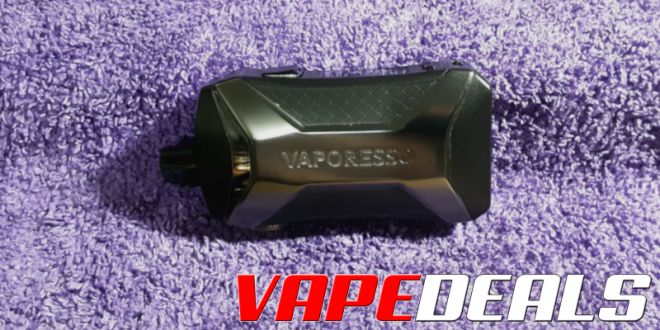 Disclosure: The Vaporesso XIRON Starter Kit was provided to me for free for the purposes of review by Vaporesso. I will endeavor to provide a fair, unbiased, and comprehensive review of the product described below, while also giving my personal thoughts and opinions. The product described in the review below contains nicotine. Nicotine is an addictive chemical.

Leaning Out an Ivory Tower

I have a confession to make; I’m a Mod Snob. While I don’t drop hundreds of dollars on bespoke stab-wood vapes, if I can’t shove two batteries up its butt and put an RDA on it, I generally look down my nose at it. Oh sure, I’ve tinkered with AIOs and disposables. But they’re novelties to me. Entry-level tech for people who can’t commit to jumping down the Vaping rabbit hole like I did. A person is only as good as their tools, right? 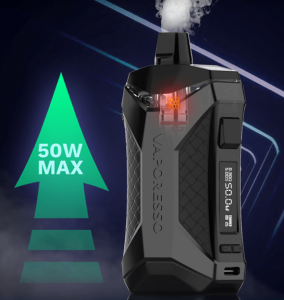 So, when Jeremy approached me with the offer to review Vaporesso’s newest AIO kit, the XIRON, that was the mindset I came into it with. The company already had a good reputation with me, but I was still going to be writing up a less than awesome bit o’ kit. So now, having used it for over a week, and putting over two thousand puffs through it? In some ways, my snap judgment was misguided. In other ways, it was justified. Will it replace any of my “real” mods? No. But I’m gonna keep using it. 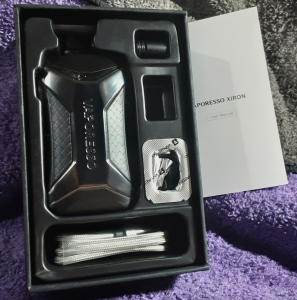 The Vaporesso XIRON is a 1500mAh internal battery AIO vaping device, capable of outputting a range of 5-50 Watts and fast charging at 2 Amps. At the time of writing, it comes in five colors (Green, Red, Blue, Silver, and Black), with an MSRP of $40. It uses a clear pod for holding eJuice, which is fitted for Vaporesso’s GTX line of user-replaceable coils; the same line is also used in the Gen Nano and PM series of mods.

This little chungus is surprisingly dense for its small size. Easily palmable, although for reasons explained later that’s not applicable. I received the black version, and while the colored portion of my unit doesn’t have a texture, supposedly the others do in a similar way to other Vaporesso products. The black portions of the mod, however, do have a slightly rubberized texture, embossed into a pattern that mimics carbon fiber. All three buttons have a nice tactile bump to them. The fire button is positioned and sculpted in such a way that makes it very ergonomic for finger firing. And that’s a good thing, because of the Airflow Control.

Whew, lad, let’s talk about this AFC. Designed (or blatantly copied from) the AFC on the Geekvape Aegis Boost, it consists of a circular dial with a C-shaped hole on the interior. Beneath that is a matching C-shaped entrance to the mod. You physically twist the dial to close off or open the airflow.

The major problem with this AFC is simply the positioning of it. Due to its orientation on the device, you can’t palm the Vaporesso XIRON without completely blocking the AFC. You have to hold it at an angle so that the AFC isn’t blocked by the webbing between your thumb and forefinger. Likewise, if you want to thumb-fire the mod, you have to lift it up out of your hand so your fingers don’t block the airflow. It all just feels awkward and I feel like it could have been engineered better.

Also, a minor nitpick, but one worth mentioning: at any amount beyond about half-closed, the AFC gets very noisy and whistley. Turbulent. That may not bother some people, but I prefer my vaping experience to not be cacophonous.

The pod is a bone of contention for me. I like a lot of what it does, but there’s one big glaring fault that almost ruins it. Firstly, the pros.

The pod is completely crystal clear. Accompanying that is a large viewing window when plugged into the mod. You can always check at a quick glance to see how much juice you have left without the hassle of dark, obscuring plastic. Next, I really appreciate that Vaporesso chose to use a 510 connection for their mouthpiece, rather than some proprietary tip. While the two that came with the XIRON are more than adequate, I swapped to one of my own favorite 510 tips. This made the experience much more comfortable for me. From an outside observer, that might seem like a tiny thing, but for anyone who has a favorite drip tip, you know what I’m talking about.

The one big fat elephant in the middle of the pod room is that it is damn near impossible to remove. It’s all smooth plastic, with zero grip points on the exterior, and three strong magnets holding it into the device. To remove it, you have to grip the mouthpiece and yank it out forcefully. If your tip isn’t tight in the pod, good luck. I realize that’s only an issue when you need to change coils, but still a big negative. Yet again, something that the designers at Vaporesso should have corrected very early in the design process. Even a slight ridge near the top of the pod would have been enough.

I’m not going to go into too much detail about the coils included. The GTX line has numerous coils which you can purchase after the fact (including an RBA), so you can tailor your experience to how you like it. I will say, the DL coil included puts out quite a bit of flavor. While not quite comparable to a mesh RDA in terms of flavor production, it holds its own against other AIOs I’ve sampled admirably. 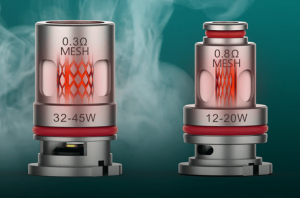 The charging on the Vaporesso XIRON is legitimately the fastest I’ve ever seen on a vaping device. Using the USB-C cable, I was able to go from 10-15% to full 100% in half an hour, multiple times. Which is good, because vaping at 40 watts with its 1500mAh battery means giving it the juice at least twice a day.

The menu screen/display is perfectly adequate. It shows you everything you really need to know on an AIO. One thing I didn’t care for was that it only displayed the numerical percentage of battery charge when actually plugged in. Any other time, it was just the typical vague battery icon. The one thing that I found utterly bizarre was that, once you hit 1000 on the puff counter, there’s no combination of key presses to reset it. You have to literally go into the menu and reset the mod to its default settings to reset the puff counter. Again, yet another minute attention to detail that makes me feel like the XIRON was rushed to market.

Going back over this review, it would be easy to get the impression that I hate the XIRON. The irony of the matter is, for all its faults, I actually like the damned thing.

It’s small, sturdy, comfortable to hold, has great flavor output for an AIO, and charges like greased lightning. It has a clear pod so I’m never in doubt when it’s running low on juice. I can use my favorite drip tips on it. I’ve dropped it almost a dozen times with nary a scratch or scuff on it. The top-fill design of the pod means you never have to take it out of the mod unless you’re swapping coils. I’d say most of my negativity comes from the eyes of an experienced vaping enthusiast; someone who has certain expectations for what they want out of a device and is disappointed when they aren’t met. If I’m using the eyes of someone new to vaping, however, there’s a lot more good than bad here to recommend.

So, would I recommend the Vaporesso XIRON? To someone who’s just coming in from the no-man’s land of pods and disposables, absolutely. To someone who needs a replacement for an older AIO? Sure. For a shameless Mod Snob who’s been in the game for eight years? Eh…I plead the Fifth. 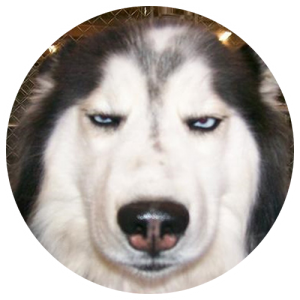