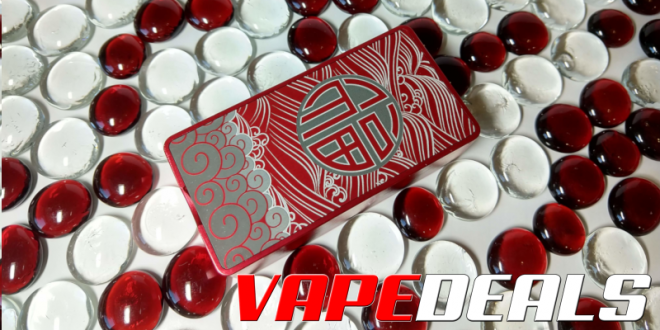 The Ultroner Take It Go 80W Box Mod in this review was provided by our friends over at Fasttech (thank you!). You can use coupon code “MAP” to pick one up for only $57.09 with free shipping. 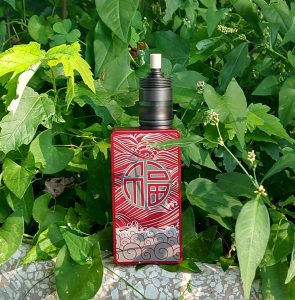 Despite the ridiculous name (Take It Go?  Seriously, who comes up with this stuff?  It makes me wonder if the triple-battery version will be called the “Ultroner Leave It On Table”), I absolutely needed to get my hands on this one.  As a big fan of MTL, there will always be a special place in my collection for single-18650 devices.  It was the design of the Ultroner Take it Go that specifically appealed to me.  Not just the classic box mod shape (which I love), but also the intricate panel engravings, the hidden screen, and unusual button placement.  It doesn’t look like everything else on the market, which is something I can appreciate.

As I’ve said before, my opinion of the Packaging and Presentation section of reviews has always been the following: unless it’s really bad or really good, who cares!  In this case, however, it’s actually quite the showcase. 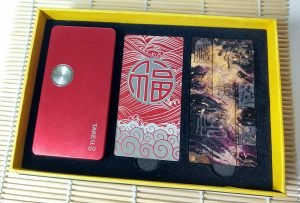 The Ultroner Take It Go comes in a clean red box with 2 gold foil insignias, indicating the style of the panels.  I opted for the Red Fu version.  Regardless of the interpretation (apparently, “Fu” translates to “fortune”), I’m delighted to own a mod that secretly says “FU!” on the side of it.

Upon opening, you’ll find the device neatly displayed alongside both panels (one is metal, the other is stabilized wood).  Again, while I would agree that packaging is ultimately unimportant, a beautiful presentation like this really adds something to the forthcoming experience with the product.  It’s like that sexy lingerie that your lady puts on before…

[The owner of VAPE.DEALS removed the rest of this paragraph and gave me a verbal warning.  I suppose I got a little carried away.  4 months of quarantine will do that to a man 😉].

This was one of those rare occasions where the physical product ended up being vastly superior to my expectations.  My previous experiences with Ultroner products have been mostly good, but never amazing.  Obviously, stabilized wood is their bread and butter, so the T.I.G is a departure for them.  Because of this (along with the fact that this was not a popular device), I decided not to get my hopes up…and maybe that’s why I was so impressed when it finally arrived.  The build quality is exceptional! 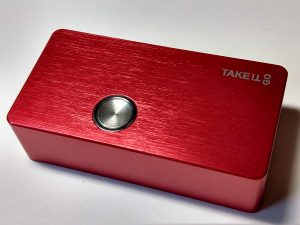 Let’s start with the materials.  The chassis of the mod has a brushed metal finish, complimented with an anodized red color (there is also a black version available).  I prefer this type of finish; it just screams class/quality and it’s usually pretty durable.  But I’m just getting started.  Ultroner didn’t overlook the little things, like how the “Take it Go” logo on the back of the device is deeply engraved (as opposed to laser etched).  Even the firing button and the 510 connection feel high-quality, like something you’d find on an expensive custom box.  I suspect this product was important to the designer(s).  Someone clearly refused to cut corners here, regardless of the impact it had on profit margins.  Whoever you are, Bravo!  Maybe no one else noticed these things, but I applaud the commitment to quality. 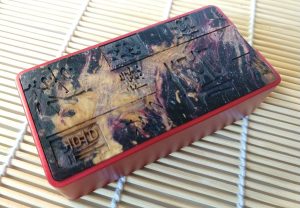 As I’ve already mentioned, the Ultroner Take It Go comes with 2 different panels.  One is metal, the other is stabilized wood.  Both of them are gorgeous, but the metal one really steals the show.  The colors are a mix of white and 3 varying shades of gray, all of which are complemented by the red finish of the panel.  The intricate engravings are damn near flawless; pictures will not do them justice.  You’re not likely to find anything like it from the majority of mass-produced products coming out of China these days.  This panel fits almost seamlessly into the device; if you didn’t know any better, you might think it had an internal battery.  On the other hand, the stabilized wood door has a considerable amount of play.  I immediately found this annoying and set it aside.  There’s a good chance these 2 panels were produced in separate factories. 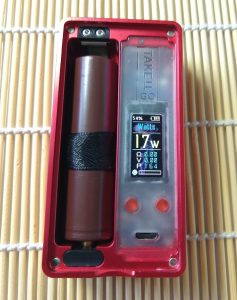 The attention to detail is highlighted even further when you remove the panel.  Here you’ll find the battery sled alongside the full-color display and adjustment buttons.  The housing for the display is translucent plastic, allowing you to see the chipset behind it.  Also, the buttons are translucent red, matching the color of the mod.  It’s an incredibly thoughtful design.  Keep in mind that this is all hidden 99% of the time, so there’s really no reason for them to do anything special here…and that’s why I appreciate it so much.  It further convinces me that someone put a lot of heart into this device.  As John Hammond might say, “Spared no expense!”  I do have one minor complaint here though.  The 2 buttons are flush with the panel, which means you have to dig your fingernail in there to make any adjustments.

One thing that baffled me about the interior is the negative battery terminal.  It isn’t your standard spring-loaded connection, but rather, it’s a bent metal piece, similar to the Billet Box.  It just seems like an outdated design.  But in all fairness, the tension is perfect, and it’ll be easy to maintain.  If the connection ever loosens, you can just bend it back out again.  And if something catastrophic happens, it should be easy to replace.  I should also mention that the battery ribbon is too long, which may cause the door to rattle.  Just tuck the ribbon in before putting the panel back on and you won’t have any issues.  It’s as easy as that.

Although we’ll touch on a few cons in this section, I’ll start by saying that I like the simplicity of the SEVO chipset.  Here’s a basic idea of how it works:

That’s it!  As I said, it’s a simple chipset, which is exactly what I want from a mod (although I’m sure others would prefer some more advanced options).  The color display is crisp, and the layout is clean and easy to read.  I honestly wouldn’t change anything about it. 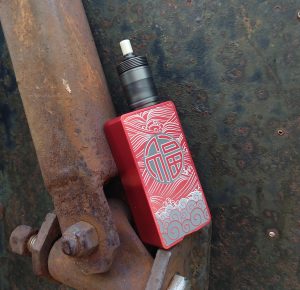 As much as I like the functionality of the chip, it isn’t perfect.  For starters, when in VW mode, the voltage reading on the display is almost always inaccurate.  I confirmed this with an Ohm’s Law Calculator, a DNA mod, and an inline voltage meter.  Basically, the output is correct (which is great), but the reading on the display is higher than it should be.  When I tried it in VV mode, the actual output was off (I had the mod set to 3.7V and it was outputting 3.8V).  In short, I don’t think the chipset is calculating voltage properly.  This could be easily remedied with a firmware update, but I couldn’t find one.

Another potential con is that the mod will drain the battery down to 3.2V, despite the manual saying 3.3V is the cutoff.  This isn’t unsafe by any means, it’s just not as advertised.

If I’m being honest, I don’t care all that much about these issues.  Almost every device has a few quirks and this one is no exception.  The point is that the SEVO chipset could use a little fine-tuning.

While I’m sure the Ultroner Take It Go won’t be everyone’s cup of tea, I can wholeheartedly say that it puts a smile on my grumpy face.  It is a reminder that despite all the dime-a-dozen devices on the market nowadays, some companies are still willing to take chances and create something special. 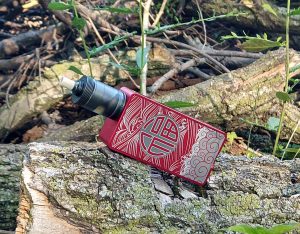 I find it utterly disappointing that the T.I.G didn’t get much buzz in the industry; then again, maybe that’s why I have such an affinity for it.  It’s a diamond in the rough, my friends.  A little gem nestled between hundreds of other devices that do exactly the same thing.  There’s nothing new or groundbreaking here, this one just seems to shine a little brighter than the rest.

If you like the look of it and can forgive its shortcomings (single-18650, lack of TC, and slightly inaccurate chipset), I honestly don’t think you’ll be disappointed.  It is getting harder to find though, so you’ll need to grab one fast.  Thanks for reading!